Margret has decided that South Sudan is not a place to raise children, but she is changing this for future generations.

That’s why – 10 years ago – the mother of two joined the country’s 400 to 500 deminers, digging up remnants of past and present wars – bombs, unexploded ordnances and landmines.

She’s one of a growing number of women to take up the risky business, most of them mothers wanting to provide safety for their families. 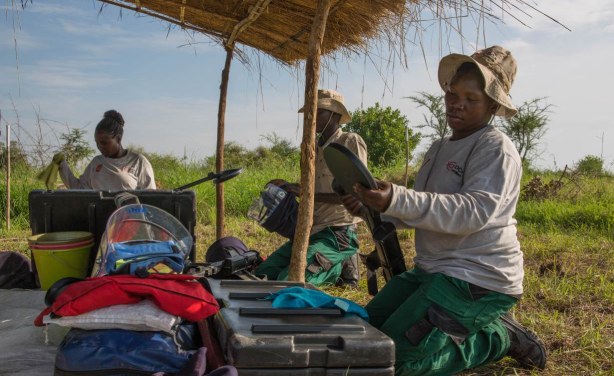 “It’s my way of contributing and making this country better,” she said. “I sent my children to Uganda, but I want them to come back one day. It’s a sacrifice for me, but a gain for those returning when the war is over.”

Landmines have a long history in South Sudan, the world’s youngest nation that won independence from Sudan in 2011 after a long and violent liberation struggle. After just two years, a political squabble escalated into renewed civil war in late 2013, fracturing the new nation along ethnic lines.

More than four million mines and explosive devices have been found and destroyed in South Sudan over the last decade, says the United Nations Mine Action Service (UNMAS). While some accidents are recorded, UNMAS believes that at least 90 percent go unreported.

Margret currently works around Kolye village, a 30-minute drive on unpaved bumpy roads from the South Sudanese capital Juba in a lush setting of green fields and mango trees.

The area saw heavy fighting between the Sudanese army and southern rebels during Sudan’s long civil war which ended in 2005, paving the way for the South’s independence.

Deadly anti-personnel fragmentation mines were laid by Khartoum’s forces to protect their barracks. 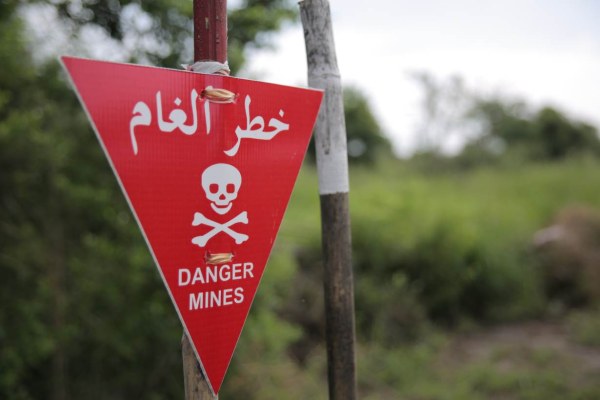 More than a decade later, they are still killing civilians.

“Soldiers placing mines think carefully about how humans behave, where they go and what they do. That is why mines are found alongside roads, in marketplaces or by water points,” said Jan Møller Hansen of DanChurchAid’s demining project, the organisation that also employs Margret.

While mines are easy to place, they are hard to remove. After an eight-week training course, Margret has dug out hundreds of them throughout her career and – on a good day – she can cover up to 30 square metres (320 square feet).

“We can use the safe land to build roads, hospitals and schools and that’s what excites me the most,” she smiled.

According to UNMAS’s demining chief, Tim Lardner, it will take at least another 10 years to clear up the whole country that is roughly the size of France.

South Sudan signed the Mine Ban Treaty less than six months after independence in 2011, deeming anti-personnel mines illegal and their removal mandatory.

Renewed war has complicated efforts to remove mines from previous conflicts, while rebel forces, without providing evidence, have accused the government of laying new explosives in violation of the treaty, a charge it denies.

Margret works together with her friend Angaika, a mother of four and deminer since 2006. They start at eight in the morning, with a driver taking the 10-person team out to the field. 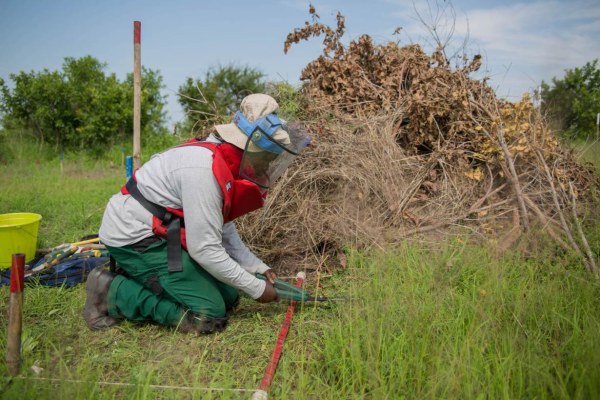 Margret demonstrates on an already cleared pitch of land how she cuts down grass to get to buried mines. Credit: Stefanie Glinski/Thomson Reuters Foundation

Their operation area is well equipped with a briefing tent, several medics and an ambulance. But the nearest hospital is 15 km (9 miles) along dire roads, while the threat of ambush or looting by armed groups makes the work even more dangerous.

“Each day we communicate through high-frequency radios and satellite phones to find out if conditions are safe. We don’t want to become victims of violence,” said Margret, who did not give her full name.

Finding explosives is hands-on work and, dripping sweat in their thick uniforms, teams clear the area inch by inch with metal detectors, scissors and garden tools to cut down grass and dig out explosive devices.

“My heart still beats faster when my detector beeps. I know that I could be very close to a mine, but I know my work and am not afraid,” said Angaika. “I think about my children in those moments. My work is for them and their future families. That’s what makes me strong.”

Once the mine is dug up – it can take up to 30 minutes – a controlled explosion is usually carried out on site.

“Local communities often inform us about devices they have seen,” DCA’s Møller Hansen said. “They recognise them from the awareness training they receive.”

Koyle, a once lively community, is now deserted due to the menace of landmines. Farmers have left their green and fertile fields, leaving silence except for birdsong. 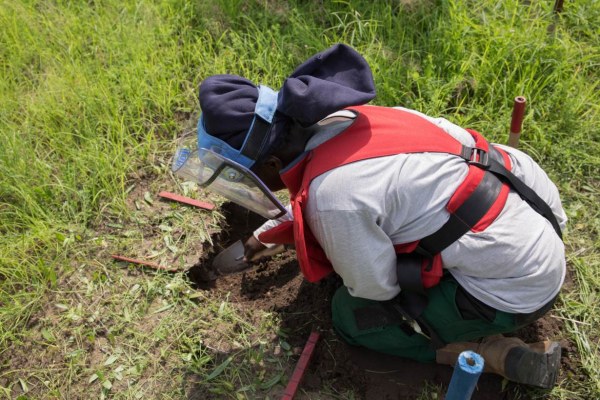 Angaika Benjamin demonstrates how she would dig out an explosive device.

After 10 weeks, Margret and Angaika’s team is on its final stretch before a week’s break. They started in mid-May and have since cleared almost the whole field of about an acre.

Ahead of them are red posts and danger signs – marking out their next project.