Opinion: Without The Devil, There Is No Christianity

Without the devil, there is no Judaism, Christianity or Islam. Neither sin nor the devil are native African concepts. ‘Devil’ as expounded by the alien unAfrican, anti-African and non-African Judeo-Christian &Islamic religions, does not exist in traditional African spirituality. We don’t condemn, much less demonize anyone who believes in the “the Devil” or even “the Devil” himself. One is free to believe in anything onewishes. The only case we make is, ITS NOT AFRICAN.
“African Religion doesn’t know a cosmic principle of evil like the devil in the Christian and Muslim faith.”Gregor Schmidt, MCCJ Contemporary Beliefs about Witches and Witchcraft in Kenya, p.3

“Within the African worldview there is no concept of a devil that is in constant battle with God. Only through colonization and enslavement have Africans adopted such a notion, and in some instances they have infused it into their own indigenous belief systems.” The African Concept of God,p. 6 (Unattributed)

“African spirituality does not recognize any all-powerful supernatural being that is hell bent on deposing the creator as master of the universe. Consequently there is no word for ‘Devil’ in most African languages. In their pathetic disingenuous attempt to translate the alien concept of ‘devil’ into African languages, the unimaginative purveyors of the intolerant alien creeds (Islam,Christianity) distorted, mangled anddemonized otherwise reputable African deities like Esu & Ekwensu. ‘Devil’ is a figment of superstitious Judeo-Christian/Islamic imagination; a convenient fall-guy to explain their moral failing .” Esu: The Revenge Of Bishop Ajayi Crowther, By Remi Oyeyemi, Nigeria Village Square”
The missionary agenda had had a number of effects to declare ethno- spirituality unworthy; to declare imagery as idolatry, and visualization as superstition. Also, by identifying indigenous deities with the devil,missionaries validated belief in a devil with all the power and attractiveness of the indigenous deity.”Stephen Bigger Ethno-spirituality: A Postcolonial Problematic? Alternation Special Edition 3(2009):233
“Enyeribe Onuoha refutes the idea that Ekwensu is Satan or anti-God. For him, Igbo religion has notranslated word for “evil incarnate” and there are no such spirits called the “Devil” who does nothing butevil. Rather for him, Ekwensu is one of the minor spirits of Igbo spiritology.
According to him, the term is a borrowed one transported directly from Christian theology and knowledge of the Satan.” Matthew Maduabuchi Nsomma Anyanwu, The Doctrine of Resurrection and the Challenge of Traditional igbo(African) Eschatology: 313.
There is no “devil”or adversary against God in the African Traditional Religion of the Igbo“…in the indigenous cosmology the deities do not contest the power of the Supreme God (Chukwu), but rather work in concert with humans for realization of individual and communal destiny.” Elochukwu Uzukwu, Interface Between Igbo Theology and Christianity, p.87 Ref Source NGa Sidney Davis “For example, Capuchin missionaries made numerous and sometimes detailed assessments of local religious life during their evangelical work in Kongo. Much of this work takes the form of denunciations of local customs,thus revealing a strong Christian bias. This bias is reflected, for example, in their tendency to identify all supernatural beings worshiped in Kongo as manifestations of the Devil. Their accounts are never quite clear as to whether the Kongolese truly were worshiping a figure they regarded as wicked and evil in the same way Christians regard the Devil, or even whether Kongolese cosmology included a figure who served as an opponent for God, or whether the missionaries were simply assigning all supernatural beliefs to the Devil. Most historians address this difficulty by studying modern anthropological accounts or the testimony of modern Kongolese and hoping that they can see the local cosmology more fully.Nonetheless, the missionaries were contemporary eyewitnesses and thus can never be discounted as a source of information,whatever problems their bias creates.” Writing African history, edited by John
Edward Philips: 268
In Tanzania lie Lake Victoria, the Ngorongoro Crater and the Olduvai Gorge where the oldest known
remains of the human species have been found. The north-south line of lakes, Albert, Ruranzige, Kivu, and Tanganyika, make the eastern edge of the Ituri Forest in Congo. The Efe Pygmies who live on the Ituri Forest called the Towering massif of Ruwenzori Baba Tiba, the Mountains of the Moon. In Efe theology the first man ascended to the heavens after serving as a benevolent governor of the primordial Pygmy nation.
He then established residence on the moon where he still assists God by serving as the angel-of-the-moon. For tropical Black Africa the moon was, and still is, the favorite object of veneration, not the sun. 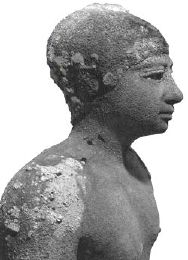 Egyptian texts from around 2500 BC refer to the Pygmies as little men from the land of trees and spirits at the foot of the Mountains of the Moon. Egyptian king Nefrikare sent an expedition into central Africa and it returned with a dancing dwarf known as Akka. In the pyramid text of the sixth-dynasty monarch Pepi I it is declared that,

“He who is between the thighs of Nut is the Pygmy who danceth like the god and who pleaseth the heart of the god before his great throne.” Nut was the goddess of heaven and the mother of Osiris. This Pygmy was called Bes. ( Courtesy Shahar Harari)

There is no Devil or demonizing or Intra- and inter-religious hate and violence or human right violations among, between or against practishioners of African Spirituality, African Traditional Religion (ATR), Indigenous (Igbo) Traditional (or Tribal) Religions (ITR), or among practitioners of Voodoo, Verdun, Juju, Obeah, Ifa, Afa, Shamanism, Wicca, etc or among Atheists or of any human being. Because of their belief in the Devil the Abrahamic religions terrorize and demonize each other and all these religions terrorize and demonize among and within themselves (Intra- and Inter), Sunni against Shia, Protestant against Catholic, also among and within Jewish sectarians (especially along ethnic and racial lines) and so on ad nauseum.
“The Book” religions have within their Holy Texts justification for religious and human violence and the demonization of others. However the Abrahamic Religions and/or “Book Religions” all agree together in one thing, they are all together and united in terrorizing and demonizing ATR or ITR. To these religionists African indigenous culture and spirituality (ATR and ITR) was seen and is still seen as “barbaric,” “brutish,” “bestial,” “black magic,” “cannibalistic,” “devilish,” “demonic,” “dispensable,” “despicable,” “heathen,” “illiterate,” “immoral,” “inferior,” “primitive,” “pagan,” “promiscuous,” “satanic,” “savage,” “sensual,” “sexual,” “superstitious,” “uncivilized,” “witchcraft”, inter alia, etcetera, ad infinitum, ad nauseum and so on. What is so ironic is they as Devil believers and demonizers accuse us of worshipping the Devil and demons when we demonize no one!
The Demonization of Afriqan People First Took Place With The God Bes
A guardian god. Bes was a foreign god, an import from the land of Nubia. He was jolly, fond of music, and dancing. He was a popular god who was adopted by the middle classes; he was considered a tutelary god of childbirth and, strangely enough, of cosmetics and female adornments.

Bes chased away demons of the night and guarded men from dangerous animals. His image was carved on bedpost. He eventually became a protector of the dead and, amazingly, competed with even the refined and magnificent god Osiris for the attentions of men. He was originally the protective deity of the royal house of Egypt, but came to be a popular household deity throughout Egypt.
Archeology Findings The oldest known fossil remains, according to Dr. Louis Leakey, were found in the Olduvai Gorge region in Kenya, Uganda and Tanzania. These first “small stature” people were known as the “Twa”, who worshipped the God Bes, a primitive human form of Horus I, being the earliest form of Ptah the God of Gods. The Twa, are modern humans or Homo sapiens sapiens. They are a diminutive Africoid people residing in the rain forests of Central Africa. Related groups live in South and Southeast Asia. We also find this same black God, Ptah, symbolized in the mystery system in Egypt. The Twa are said to have migrated the four thousand one hundred miles of the Nile river, establishing what was later to become the Egyptian civilization. A Modern Theory of Language Evolution, by Carl J. Becker, 2004, p. 164 & 167.
Full video The Origin of The God and The Devil Concept Haki Kweli Shakur & K.Kinte: