Fresh out of college and frustrated by the paucity of job prospects at home, Cao Qihan, 23, did what generations of ambitious Chinese had done before him: He rolled the dice and ventured to a far-off, utterly unfamiliar land, where people speak languages he doesn’t understand.

But unlike compatriots chasing dreams of a better life in North America, Europe or Australia, Mr Cao bought a plane ticket to Senegal, a country of 14 million that has about 2,000 Chinese residents.

Mr Cao had relatives in Dakar, the capital, but little idea of what to expect.

“We Chinese think Africa is uncivilised and dangerous, but it’s turned out to not be so bad,” he said just weeks after his arrival, as he stuffed dumplings at his family’s restaurant in Dakar’s expanding Chinatown. “I think I’ll stay awhile.”

These days, more than 200 Chinese-owned shops line Boulevard du Général de Gaulle, a gritty thoroughfare that slices through the middle-class neighbourhood of Centenaire and ends at the city’s imposing Grand Mosque.

The cramped shops heave with rhinestone-slathered jewellery, stacks of plastic kitchenware and women’s shoes adorned with bows and bling. Everything is made in China and few items sell for more than $5.

Unlike vibrant Chinatowns, the world over, Dakar’s Chinese enclave is a charmless, rough-and-tumble affair that offers little appeal to those, not in the market for wholesale goods. There are no Buddhist temples and few restaurants, and most of the day its sidewalks have a decidedly languid feel.

Most shopkeepers are originally from Henan, a poor, densely settled central province whose population of 94 million rivals that of Egypt.

Within China, migrants from Henan are often regarded with distrust, victims of discrimination based on a vague but commonly held notion that they are prone to criminality. Many toils in the most menial of jobs, working as truck drivers, farmers or labourers.

“This is how life is for us,” said Zhu Haoming, 58, a brash, fast-talking man with an easy smile. “We have to leave home to make a living. If you find a good place, you end up pulling in your friends, even if it’s on the other side of the world.”

A pioneer of sorts, Mr Zhu arrived here 17 years ago from Henan to set up a trade show for Chinese products. He never left.

“I realised that China had lots of stuff and the people here needed stuff, so it was a good match,” he said.

Mr. Zhu opened a shop selling artificial flowers and unintentionally became the nucleus of a growing Chinese presence in Dakar that has come to dominate the wholesale trade in low-cost consumer goods.

For strivers seeking opportunity abroad, Senegal seldom makes the list of choice destinations, but the ease of obtaining a visa often trumps the misgivings that many Chinese have about Africa.

New arrivals usually start off working for a wholesaler they know from home and then set off on their own as soon as they have saved enough for their first batch of goods.

Life is seldom easy. The hours are long, the profits thin and the loneliness unrelenting. Men often come on their own, but even married couples tend to leave children back home to be raised by grandparents.

On a recent afternoon, as the midday heat thinned the sidewalk crowds to a trickle, bored shopkeepers watched Chinese films on their phones while their Senegalese workers dusted the shelves and chatted with one another in Wolof, the lingua franca, which few Chinese understand.

My query about life in Senegal uncorked a torrent of complaints from the bosses: too many competitors, too few customers and rising prices for the merchandise bought during annual buying trips to China. 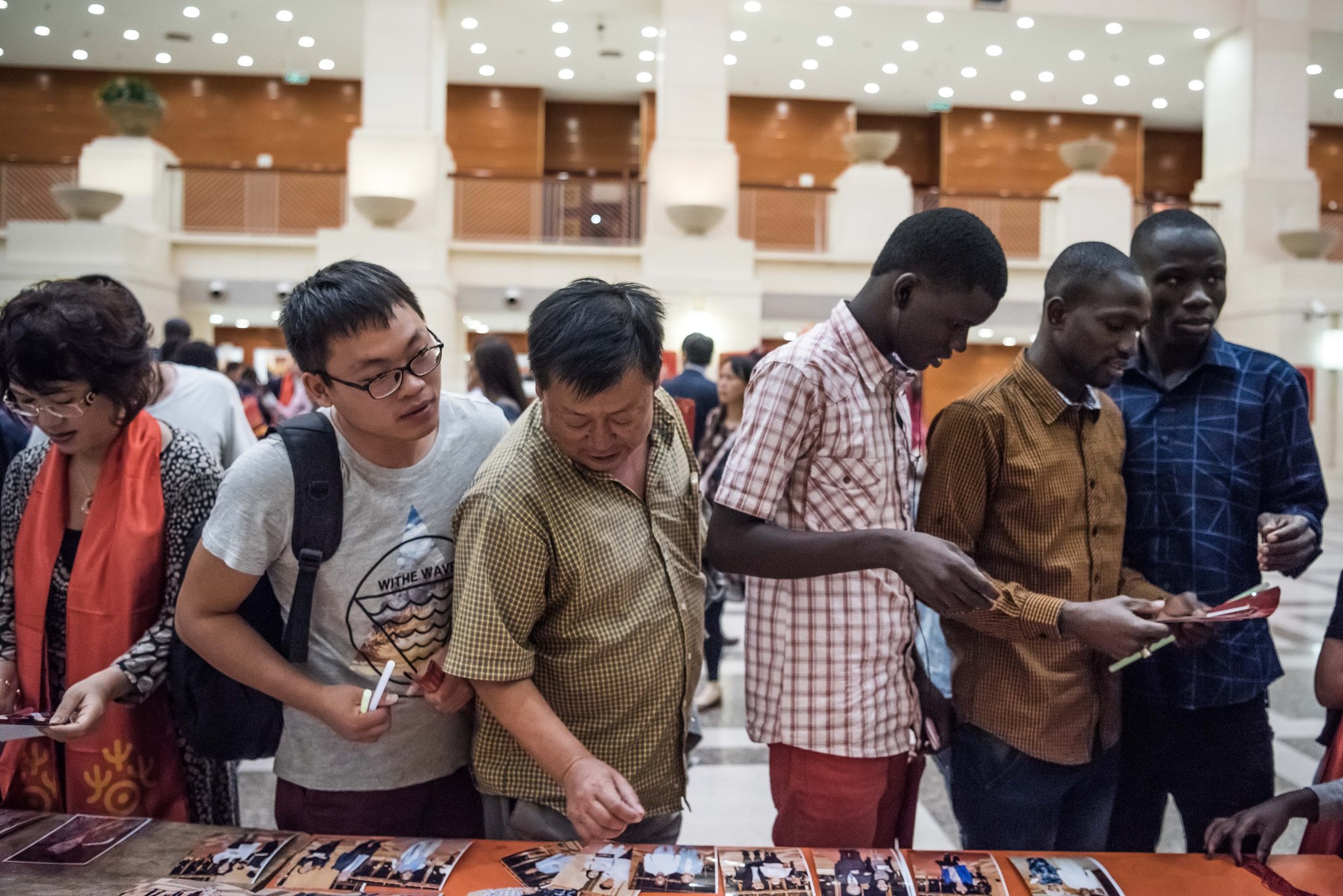 Wang Xu, 34, who sells brightly coloured bangles with his younger brother, attributed slow sales to the growing glut of entrepreneurs from China. “To make matters worse, Senegalese have less and less money to spend,” he said.

There was also grumbling about pilfered merchandise — and the indifference of the local police — but mostly a longing for home and those left behind. Again and again, the phrase “chi ku” was offered up, a well-worn expression of Chinese forbearance that means to eat bitterness.

“My son is growing up without a father,” Mr. Wang said flatly, lighting another cigarette, part of his two-pack-a-day habit.

For Senegalese, the arrival of Chinese wholesalers has been a mixed blessing. The low-end merchandise they import sustains countless peddlers, many of whom fan out into the countryside and even to other countries in West Africa. Less pleased are the Senegalese traders who used to travel to China to buy the same goods but have been squeezed out.

Jean Noel Faye, 38, who hawks women’s shoes at a ramshackle outdoor market in Dakar, said he had little sympathy for the well-to-do Senegalese merchants who complain about the Chinese and their rock-bottom prices.

“Without the Chinese, we would have nothing to sell,” said Mr Faye, who earns about 80 cents on every pair. “Those who have negative impressions of the Chinese are already rich.” 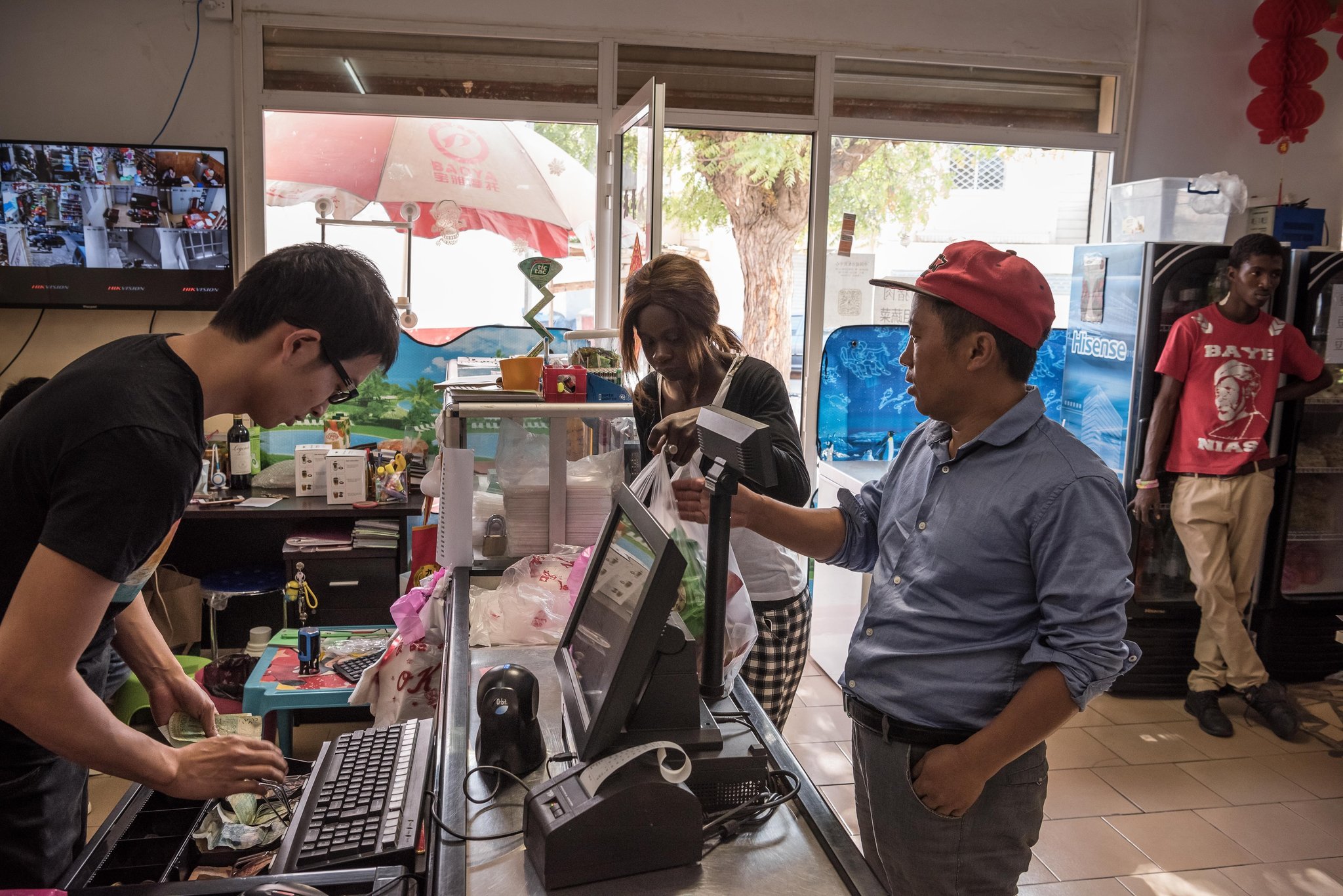 A cashier, Cheng Lai, 28, newly arrived from China’s southeastern Fujian Province, said Senegal was not what he had expected. “Before I came, I thought it would be all desert, heat and chaos,” he said. “Turns out, it’s not so bad here.” CreditSergey Ponomarev for The New York Times

Ordinary Senegalese do have legitimate complaints: about shoddy electronics, tainted medicines and the Chinese trawlers that compete with local fishermen for plummeting fish stocks.

Residents who work in Chinese-owned shops gripe about low pay and what might be charitably described as a yawning culture gap. “We really don’t have anything in common with the Chinese,” one shop assistant said, emphasising the lack of a shared language. “Their only reason to come to Senegal is to make money.”

But expressions of gratitude are more common, a sentiment bolstered by the cornucopia of Chinese-backed projects that have improved life in this dog-eared, traffic-clogged city. There are miles of new and refurbished roads, a sumptuous national theatre and clusters of gleaming exercise equipment that draw multitudes of fitness-crazed Senegalese to a seaside promenade at dusk.

The two communities, though, live in separate worlds. Mr Zhu, the pioneering wholesaler of synthetic flowers, said he knew of only two mixed marriages during all his years in Senegal. At Jade Sea, Blue Sky, the Chinese restaurant that employs Mr Cao, the newly arrived migrant, Senegalese patrons are a rarity.

During lunch one recent afternoon, the restaurant’s private dining rooms were packed: one with young engineers helping to build the city’s new airport expressway, another with toughened Fujianese merchants riding out a bout of political instability in nearby Gambia. A third room was occupied by Wu Haohong, a recently arrived businessman with a nervous laugh and an ample belly.

Briskly working his way through a box of blue-tipped Chinese cigarettes, Mr Wu extolled the opportunities of Africa but said migrants from China sometimes chose the wrong place to settle down. He knows from experience: He spent seven years in Angola but left after being robbed at gunpoint one too many times.

“Even the police in Angola are bandits,” he said, explaining why he abandoned his building supply business and moved to Senegal, opening a karaoke parlour catering to single Chinese men — and staffed by young Chinese women in crop tops who provide furtive, short-term companionship.

“The truth is that chaotic places can be good for business because it thins out the competition,” he said. “But everyone has their limits.”