DETROIT — Pvt. James Robinson played an important role in the Revolutionary War’s final battle, but like many African Americans who took up arms against the British, he received little lasting recognition.

That’s about to change.

Members of two patriotic lineage societies plan to give Robinson, who died in 1868, military funeral honours during a ceremony next month at Elmwood Cemetery in Detroit. A special grave marker will be unveiled, too.

“Over 5,000 African Americans served in the Revolutionary War, and Robinson is one of the most consequential figures of the period,”  said Elijah Shalis, secretary of the Michigan Society Sons of the American Revolution.

“He deserved this honour 151 years ago for his service to his country.”

Robinson led a remarkable life: He was a slave and a minister who fought in two wars and died at age 115 as the last known living African American veteran of the Revolutionary War.

A war hero, and then back to slavery

Born into slavery in 1753 in Maryland, Robinson served in a light infantry regiment after the Revolutionary War broke out in 1775, Shalis said.

During the battle of Yorktown, Robinson charged up a British rampart, fought against and killed three men and helped take over the rampart, Shalis said. The battle ended with the British surrendering.

Robinson had been promised freedom in exchange for fighting. Instead, he remained a slave and was sold in Louisiana. He went on to fight in the Battle of New Orleans in the War of 1812.

By the 1820s, Robinson had a license to preach as a Methodist minister, according to a letter to the editor that ran in the Detroit Free Press in 1984 from a writer pushing then for a special historical marker for Robinson.

It’s unclear when Robinson finally became free. Shalis said U.S. Census records show him living as a free man in Ohio in the 1840s and 1850s. The 1860 census lists him living in Detroit. 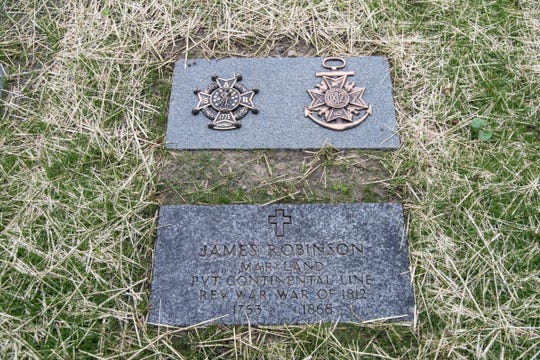 James Robinson’s headstone at Elmwood Cemetery in Detroit, Friday, May 24, 2019. Rev. PVT. James Robinson died in 151 years ago. The Michigan Society Sons of The American Revolution is hosting a patriot grave marking ceremony for him on June 22, 2019, at the cemetery. (Photo: Junfu Han, Detroit Free Press)

No known honour for him after the war

It’s also unclear what type of recognition he received, if any at all, at the time of his death for his military service.

Elmwood Cemetery’s handwritten records from 1868 say that Robinson was “coloured” and died of old age, but don’t mention his service.

Shalis learned about Robinson through conversations with Maurice Barboza, who is leading the effort to build the National Liberty Memorial in Washington, D.C., to honour African Americans involved in the American Revolution.

“James Robinson … was indicative of the kind of spirit we want to inject in this memorial,”  Barboza said.

“It’s heroism, but it’s also incredible doggedness. Nothing destroyed his spirit. He must have been one extraordinary human being to have endured what he did.”

Barboza said while black soldiers were honoured for their accomplishments in the war, they were largely forgotten in the decades that followed as slavery persisted.

“Following the Revolutionary War, people weren’t thinking about freedom or liberty,” he said. “They were thinking about building the country, and to continue to do so with the slave labour that they had.”

The Michigan Society Sons of the American Revolution (MISSAR) and the Michigan Society of the War of 1812 purchased bronze emblems that represent the wars in which Robinson fought. The emblems were affixed to a granite stone donated by Elmwood Cemetery.

The special grave marker will be dedicated during a June 22 ceremony at the cemetery. A sword salute and a possible 21-gun salute are among activities planned.

Shalis said Robinson’s last living relative appears to have been a granddaughter who died in the 1980s.

It’s important to keep Robinson’s memory alive because his story shows how all types of people helped create the United States of America, Shalis said.

He noted that along with people of African descent, the French, Dutch, Spanish, Native Americans, Muslims, Jews and others contributed to the American Revolution in various ways, from fighting to providing financing and goods.

“America was only founded because everybody was involved, not just old white men, like a lot of people think about when they think about the American Revolution,” Shalis said. “Without every single segment of society that was involved, it wouldn’t have been possible.”