Let Go of Our Hair and Let Our Girls Learn In March 2017, twins Grace and Thabisa, who are of South Sudanese descent, were pulled out of their classes at Bentleigh Secondary School in Melbourne, Australia, and told to remove their braids because it didn’t “represent the school.” After an uproar from parents who said the policy was an attack on African culture, the girls were allowed to return to school. 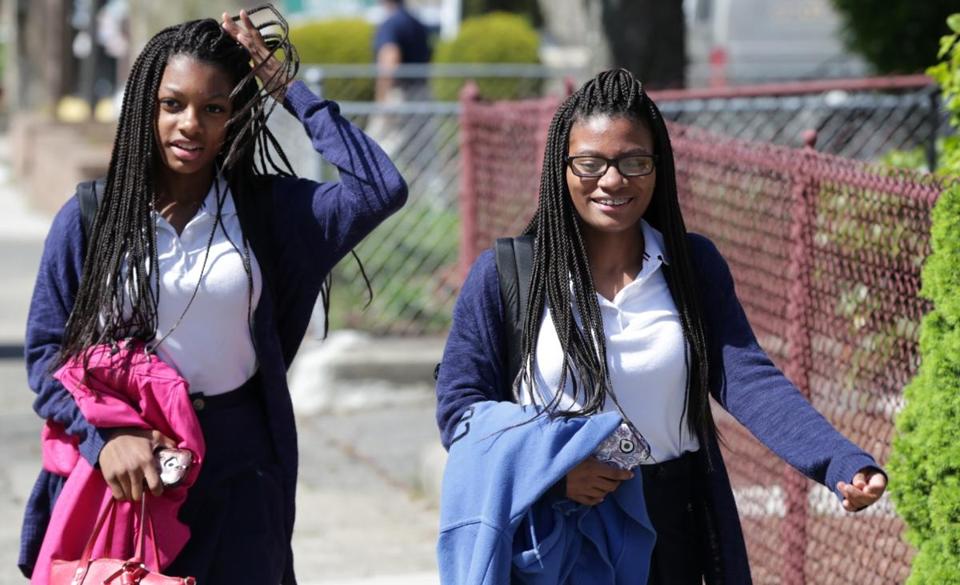 Last week, there was a story about twins Maya and Deanna Cook, students at Mystic Valley Regional Charter School in Malden, Mass., who were kicked off their sports teams and prohibited from attending a prom because they wore their hair in braids.
The school said that the girls were in violation of the dress code for wearing their hair in an “unnatural” way, which includes braids. The girls were also placed in detention for two weeks for refusing to change their hair, and other black students were singled out for hair inspections. News outlets reported this week that at Montverde Academy in Lake County, Fla., school administrators asked Nicole Orr, a 16-year-old black student, to change her natural hair because it was against the dress code. In both cases, school administrators contacted the parents first to ask them to “correct” the teens’ hair. In Nicole’s case, administrators cited the need for “neat” and “clean” hair.
That black person in general and black girls specifically are being targeted by these discriminatory practices because of “neatness” and “cleanliness” is laughable. It is common knowledge that hair lice are a major problem with white schoolchildren, particularly in elementary schools. Thousands of letters go out to parents each year regarding lice outbreaks, and some parents complain that children with lice are sometimes allowed to stay in school, as was the case in Arlington, Va., in 2014.
Many environmentalists, some of whom are students, believe that taking fewer showers saves water, which is true. This practice, however, also means that people are often subjected to foul bodily odours as well as dirty hair, which can be oily, greasy and downright smelly.

As a college professor, I encounter all kinds of folks. It has never occurred to me to file lawsuits against my students or colleagues or to lobby for policies to put an end to this practice. If they’re cool with having hair that sometimes smells like a combination of garlic bologna, dogs caught in rainstorms and formaldehyde, then so be it. In my head, I call it “Eau de funk for our future,” and simply suck it up. So why are black people in general and black girls specifically being targeted?

The Petty Pendergrass in me thinks that some folks are jealous because they don’t have the versatility that natural hair affords black women. We can lock, twist, cut, grow, curl, weave, braid, shave—pretty much do anything we want with it and look good doing it. If natural hairstyles worn by black girls are so bad, then why are white celebrities like Fergie, David Beckham, Juliette Lewis and the Kardashians celebrated for wearing them?
The academic in me knows that there’s something more occurring: the targeting of black girls for whatever infraction—perceived or real—of normative worldwide behaviour. Historically, the bodies of young black girls have been policed, touched, harassed and violated—legally. See slavery. See segregation. See the civil rights era. See the post-civil-rights era. See the new millennium. See Halle Berry’s unwanted kiss from Adrien Brody at the 2003 Academy Awards. See the kidnapped girls of Chibok, Nigeria. If you think that a focus on people touching black women inappropriately, especially when it comes to our hair, is a stretch, then listen to Solange’s song “Don’t Touch My Hair” for a recent testimony.
What is happening to our girls now is not a stretch. In fact, it is part of the fabric of our country and its institutions. In September 2016, the 11th U.S. Circuit Court of Appeals ruled against the Equal Employment Opportunity Commission in a lawsuit filed against Catastrophe Management Solutions, effectively ruling that refusing to hire someone because he or she wears dreadlocks is legal. Out of all the hairstyles, people wear in this country, dreadlocks—a natural hairstyle that is sometimes worn for religious purposes, sometimes for fashion or for personal expression—were singled out.
Discriminating against people with “natural” or “black” haircuts across many categories, including race, class, gender and nationality. Singling out and discriminating against black women for natural hairstyles like locks and twists is quite common, in fact.
In 2014, Ayana Byrd and Lori L. Tharp wrote an article for the New York Times entitled, “When Black Hair Is Against the Rules,” detailing the long history of discrimination by U.S. institutions against black hairstyles. The article came out just as the U.S. Army’s grooming policies, some of which specifically targeted black women’s natural hairstyles, including dreadlocks, were being revised by then-Secretary of Defense Chuck Hagel after the Congressional Black Caucus, led by Rep. Marcia Fudge (D-Ohio), requested the revision.
Reportedly, there was a lot of confusion about the rules because many officers had trouble differentiating among locks, twists and cornrows. Despite the federal circuit court’s ruling in 2016 allowing discrimination in hiring against blacks with dreadlocks, the U.S. Army lifted the ban on locks, ending years of “scrutiny and confusing enforcement of rules about their appearance,” in February 2017.
Even though the Army could have continued to legally enforce the policy as a requirement for employment, it chose to do the opposite. Why? Because singling out one group of people for something like hair is demoralising, abusive and unnecessary. How do you ask people to die for their country but then give them grief over the actual hair growing out of their scalps? The answer is, you don’t, because, wait for it: It’s the right thing to do.
What is happening to these young black girls in schools is what happens when a federal circuit court makes it OK to discriminate against black people with natural hair in the workplace. Those in positions of authority at these schools think it is their right to swap one environment for another and pick on black girls because of their “unnatural” natural hair.
The only thing “unnatural” about the situation is that so-called educators would try to enlist Nicole Orr’s parents in an attempt to socially isolate her; assault her psyche, self-identity and self-esteem; and demand that she change her beautiful head of hair. What’s natural about that?

Being a parent is hard in general, but being the parent of a black child is exhausting. Why? Because we always have to worry about someone messing with our children for no reason other than that they’re black. We are always managing the expectations of others, including how our children should look in order to be palatable to them. Unfortunately, black parents also have to worry about our children being harassed, bullied or publicly humiliated by adults—grown people with academic degrees and all sorts of training, who should know better and do better.
As an educator and the mother of a black girl whose hair is natural and will remain so until she is old enough to decide otherwise, I would ask these adults to please take their hands and policies out of our daughters’ hair. In the words of India.Arie, black girls are not their skin, hair or your expectations. They are girls—human beings—who deserve to be educated without being degraded, publicly ridiculed or humiliated. Let go of archaic ideas about black people, let go of ridiculous policies about black hair and let go of the need to constantly police black bodies, especially black girls. For God’s sake, let our girls be girls, and let our girls learn.
Source: The Root|| Nsenga K. Burton, PhD.
Find the original article here.