Image caption Actor and television presenter Ada Afoluwake Ogunkeye AKA Folu Storms was among those attending Nigerian celebrities turned up to a glitzy award ceremony wearing glittery, jewelled face masks amid the coronavirus pandemic. That is despite medical experts advising that face masks do not provide effective protection.At least one of the stars said they…

That is despite medical experts advising that face masks do not provide effective protection.

At least one of the stars said they were using the mask to make a statement rather than to prevent the spread of the virus.

Nigeria has reported just two confirmed cases of coronavirus and no deaths.

The first case of the coronavirus in sub-Saharan Africa was an Italian who flew from Milan to Lagos in February.

The Big Brother Naija finalist Omashola Kola Oburoh said he turned up to the Africa Magic Viewers’ Choice Awards (AMVCA) awards in a glittery mask as a protest.

“Fashion can also be a Protest/Educative, not just a Statement…… let’s join hands to fight Covid19,” he said in an Instagram post.

It is not clear whether the comment about joining hands was intended as a joke.

The celebrities were attending the annual AMVCAs for TV and film stars in a luxury hotel in Lagos on Saturday when they wore the masks.

Television presenter and actor Ada Afoluwake Ogunkeye AKA Folu Storms, who wore a jewelled mask on the red carpet, complained that people were getting too close to her.

“No one really paid attention to my social distancing cries so I will be avoiding large crowds for the foreseeable future!” she said in an Instagram post.

“Take care of yourselves people! Wash your hands and avoid touching your face!” she added.

Meanwhile, another former Big Brother Naija housemate and fashion designer Iheme Faith Uloma AKA Ifu Ennada posted a picture of herself and used the hashtag #CoronaVirusFashion.

They are not the first celebrities to don fashionable masks at awards ceremonies. The US singer Billie Eilish wore a Gucci designer mask at the Grammy awards at the end of January. 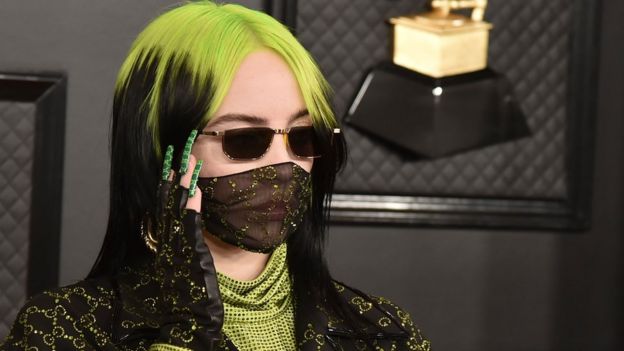 Masks also appeared on the catwalk at Paris Fashion week at the end of February. 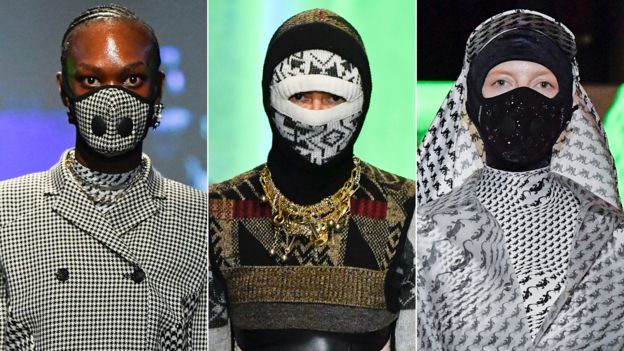 The outfits, in French designer Marine Serre’s show, were designed before the outbreak.

The World Health Organization has advised that most people do not need to wear a face mask.

Dr Shunmay Yeung from London School of Hygiene and Tropical Medicine told the BBC that if you are not close to people and they are not coughing or sneezing on you then a facemask is not necessary.